To the naked eye, the buds are all very nicely grown except for the one small bud could use slightly better trimming. Other than that, Alaskan Thunder Fuck reminded me most of Jack Herer (taste, smoke, aroma) with a more intense (cerebral) head high. This strain is definitely one of my top 3 favorite Sativas of all-time.

The smell from ATF is amazing and deserves an award on its own; it reminds me of frosty pine, or menthol… with a fresh lemon scent.

Alaskan Thunder Fuck
Name: Alaskan Thunder fuck
Type: Hybrid (sativa dominant)
Genetics: NorCal Sativa x Russian Rudalis x Afghani
The Alaskan Thunderfuck (ATF) moniker attached to this strain is just one alias of many that it goes by.
Buy marijuana online
ATF has enjoyed a long and storied history. The strain first appeared on the cannabis radar back in the mid 1970s when High Times did a feature story on the strain following a landmark court decision that essentially legalized marijuana possession for small amounts within the state. Originally, this strain was as close as you’re going to get to a true sativa, but a few years after its conception, the strain had Afghani genetics bred in for increased heartiness. For most of the 1980s, ATF had to remain underground due to constant DEA raids and was even rumored to be protected by the Hells Angels during this period.
Looks and Smell
The ATF strain is definitely one of those that gets your attention off of bag appeal. ATF really reacts to a cold climate, bringing out dark purple hues that add to the already amazing aesthetics. The buds have that super frosty, dipped-in-sugar look that everyone appreciates. It’s simply a gorgeous strain to gaze upon.Aroma

The aroma is powerful and fills up space quickly, bombarding your nostrils with varying degrees of pine, earth, citrus, skunk, and floral notes.

It can definitely take your mind for a ride, so you may want to start with low quantities (1-2 puffs), if you are a first-time patient who is afraid of experiencing any sort of paranoia.

Alaskan Thunder Fuck should be considered a morning or day-time Sativa due to its peaceful, uplifting nature.

Be the first to review “Alaskan Thunder Fuck” Cancel reply 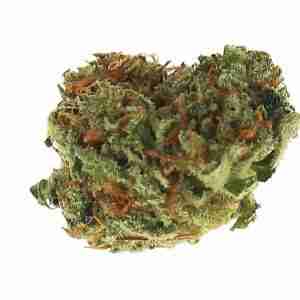